The Shore is one of the 22 theaters in my new book “After the Final Curtain: The Fall of the American Movie Theater.” Find out more here.

The Shore Theatre opened as the Loew’s Coney Island Theatre on June 17, 1925 in Brooklyn, New York. The 2,387 seat theater was built by the Chanin Construction Company, which was also known for the construction of the now demolished Roxy Theatre in Manhattan. Before opening, the theater was leased to the Loew’s theater chain for an annual cost of $150,000. The Shore was designed in a Renaissance revival style by the Reilly & Hall architecture firm, who were proteges of famed theater architect Thomas W. Lamb. Reilly & Hall included a nautical theme in the theater’s design, due to the building’s proximity to the ocean. According to an article in the New York Times, construction of the theater cost over $2,000,000, ( $27,000,000 when adjusted for inflation.) The cost of construction was quite high for a theater of the Coney Island’s size, and that was due to the ground beneath the building being largely made up of sand. 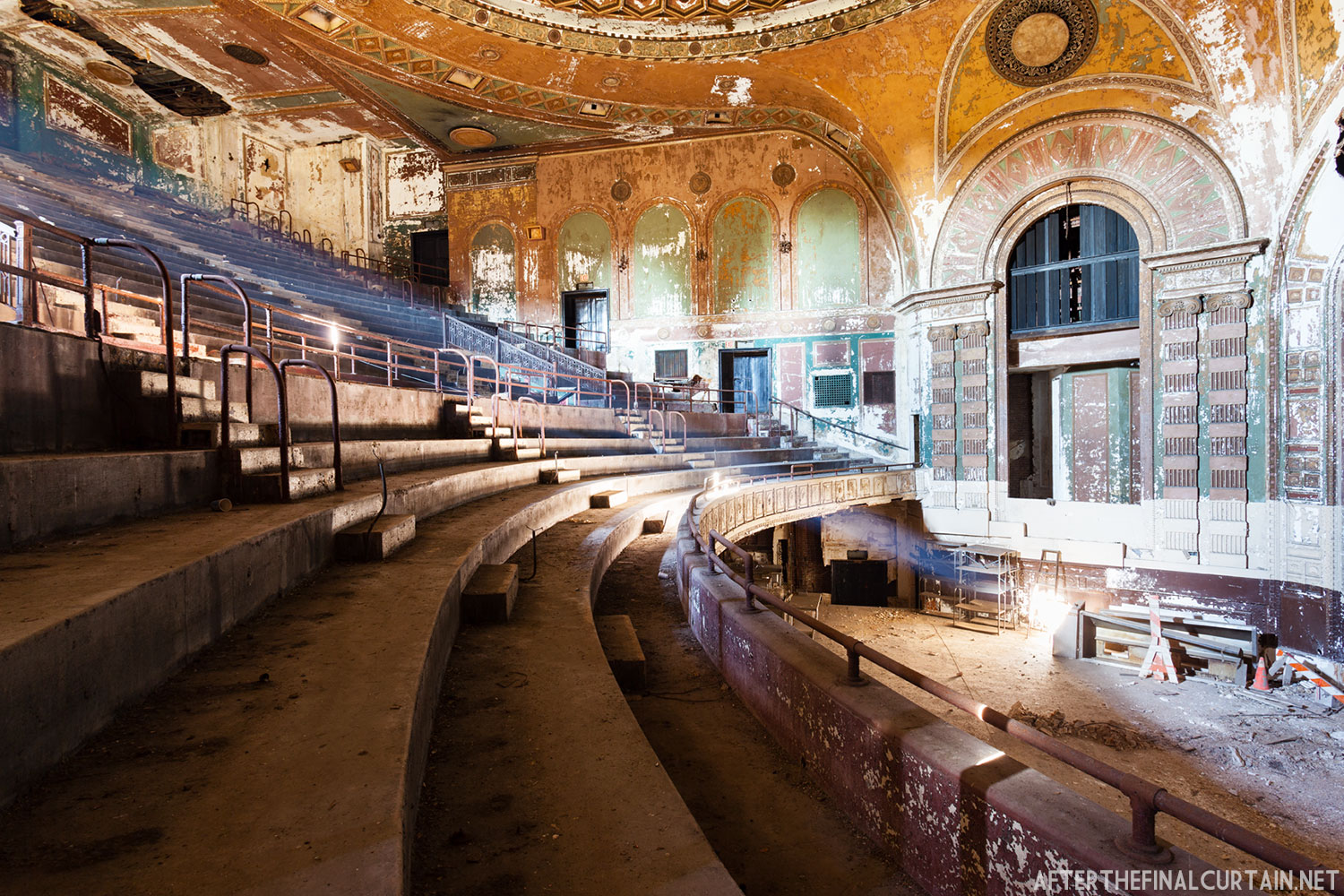 The Shore opening was presided over by Loew’s theater chain founder Marcus Loew, and included many of that era’s stars of stage and screen. Some of the many celebrities at the opening included; Johnny Hines, Barbara LaMarr, Mae Busch, Virginia Lee Corbin, and Teddy Sampson. Nine bands from various nightclubs around the city performed and the opening feature was the movie “The Sporting Venus” starring silent film star Blanche Sweet. According to an account by the Brooklyn Citizen, the crowd at the opening was so large it had to be cordoned by police. The theater was designed to be a combination house, showing both vaudeville and motion pictures, but eventually largely phased out the vaudeville performances, only bringing them back on special occasions.

A water fountain in the theater’s lobby.

On February 15, 1941, David Dolinsky, the manager of the Loew’s Coney Island, was being escorted to a local bank to deposit the day’s receipts by NYPD officer Leon Fox. A car pulled up alongside them and opened fire killing Fox. The robbers were eventually caught and sentenced to death, but the sentence was overturned after they appealed to the United States Supreme Court.

Much of the proscenium arch has collapsed due to leaks in the roof.

Evro Theatre Corporation acquired the theater from Loew’s Inc. in September 1964. Sam Kantor, the president of Evro, had worked for Brandt Theatres for almost 30 years, and continued to do so with his new company. Brandt handled the booking and advertising for the theater, which was renamed Brandt’s Shore Theatre. A little over a year later on January 1, 1966 the Brandt Co. switched the theater to a live performance venue beginning with a production of “Let’s Dance.” They attempted to appeal to Brooklyn’s large Jewish population by presenting stage shows such as “Bagels & Yox.” but that failed to catch on. On May 16, 1966, the Shore joined Leroy Griffith’s burlesque circuit with a show titled “Stars ‘n’ Strips Forever.” The burlesque shows were eventually phased out and the theater resumed showing motion pictures. 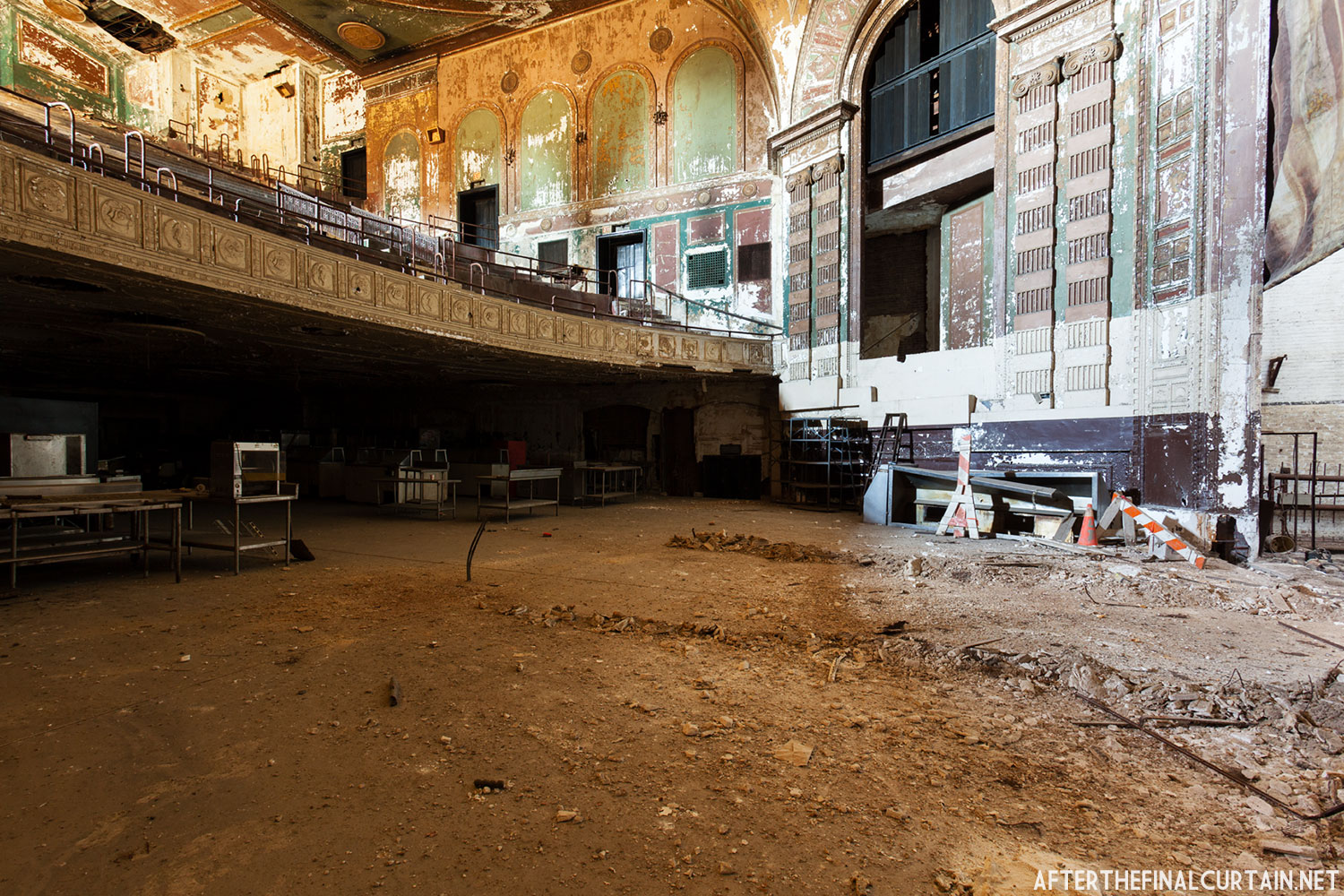 The orchestra level was used to store kitchen equipment.

By the early 1970’s, the Shore had turned to exploitation and eventually adult films. The theater closed permanently in March of 1973. Horace Bullard, owner of the Kansas Fried Chicken chain, purchased the building in 1978, and began to convert it into a casino. The seats on the main level were removed and the main floor was leveled before the state decided not to allow gambling on Coney Island. The Shore Theatre building was declared a historical landmark by the New York City Landmarks Preservation Commission on December 10, 2010. It was sold to Pye Properties for $20 million dollars in January 2016. In June 2018, Pye Properties announced that they plan on turning the building into a hotel with a a spa, banquet hall, and a bathhouse. They did not specify how much, if anything, of the theater will remain.

A compass in the center of the auditorium ceiling. 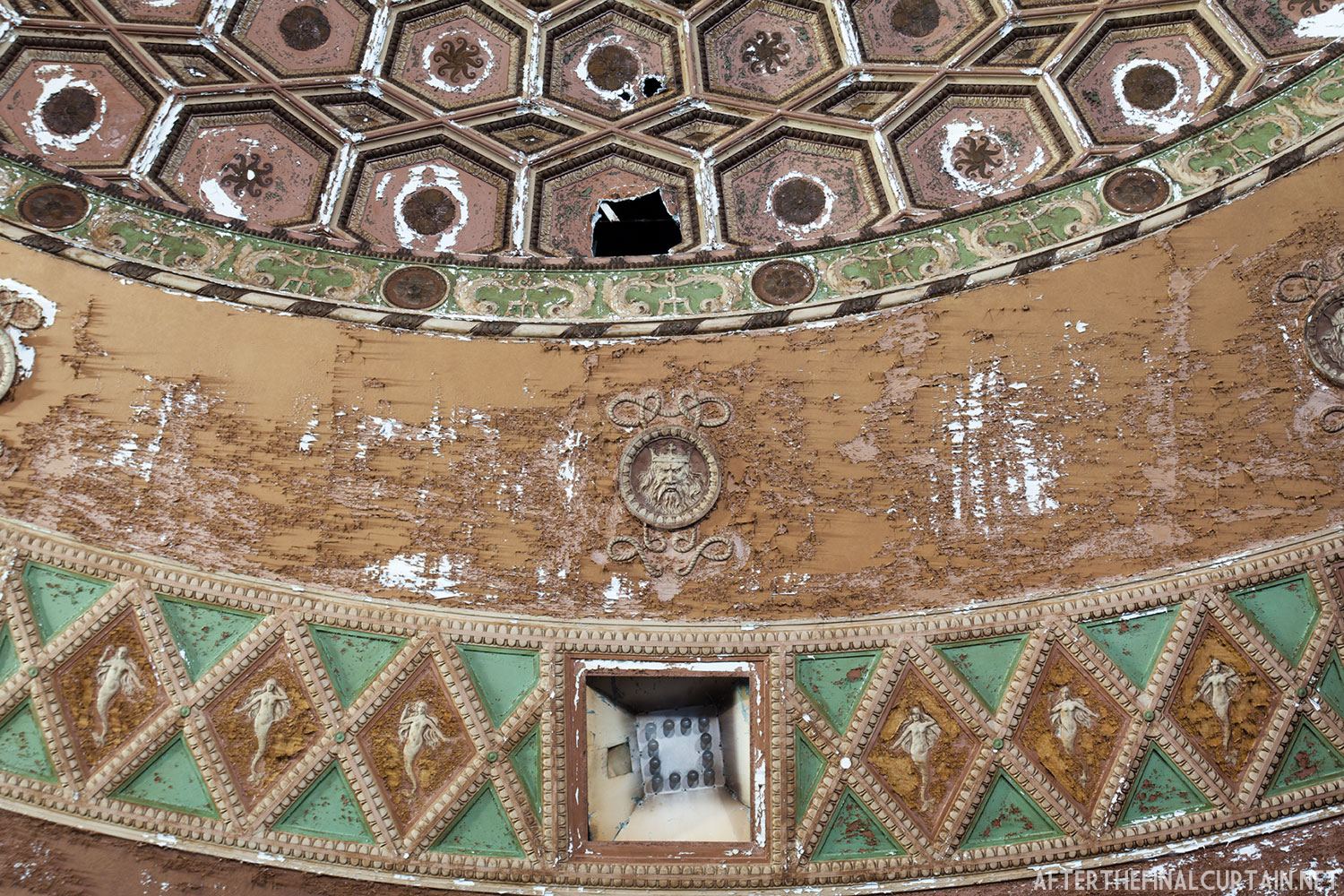 More of the nautical plaster work that covers the auditorium ceiling.

The foyer of the Shore Theatre.