The Adams is one of the 22 theaters in my new book “After the Final Curtain: The Fall of the American Movie Theater.” Find out more here.

View of the Auditorium from the center of the balcony.

The Adams Theatre in Newark, New Jersey originally opened on January 12, 1912 as the Shubert Theatre. It was designed in the Beaux-Arts style by architect William E. Lehman, who also designed the Proctor’s Palace Theatre in Yonkers, NY. The 2,037 seat theater was originally used for theatrical productions, Broadway tryouts and revivals.

Jerry Lewis was an usher at the Adams Theatre before he became a movie star.

In August 1939 the theater was purchased by A.A Adams. He changed the name to the Adams Theatre, after the name he had taken upon immigrating to the United States from Greece. The first stage show after the rename was “Susan and God” starring Jessie Royce Landis on September 4, 1939. Adams began booking big bands to support the theater in addition to the stage shows and films. Some very famous acts played at the theater during this time including; Eddie Cantor, Duke Ellington, Sammy Davis, Jr, the Marx Brothers, Tommy Dorsey, Laurel and Hardy, The Andrew Sisters, Ella Fitzgerald and Cab Calloway. In late August 1949, the Adams switched to booking vaudeville acts before each film. A week later the nearby RKO Proctor’s Theatre announced they would do the same.

The lobby of the Adams has been used for storage since the theater closed in 1986.

Harold Minsky of Minsky’s Burlesque took over operating the theater in September 1952. Minsky applied for a permit to have burlesque shows and was denied. After an appeal he was allowed to have burlesque performances at the theater. On December 21, 1955 the city of Newark passed an ordinance that made burlesque illegal. The ordinance stated that shows in which an actor disrobed or gave the “illusion of nudeness” was not allowed. It also outlawed profane, indecent or lewd language. It was immediately challenged in court by the Adams Theatre Company and I. Hurst Enterprises. I. Hurst Enterprises operated the nearby Empire Theatre, another burlesque venue. The legal battle eventually reached the United States Supreme Court who declined to hear the case, and the ban on burlesque went into effect. However, Minsky did not wait for the verdict to come in and stopped showing burlesque at the theater on February 7, 1957.

Eventually the theater began showing grindhouse and b-movies. It closed on March 31, 1986 due to a 400% increase in the insurance rates which also caused the nearby Paramount Theatre to close. It was sold in 1990 to the Freeman Group, a Manhattan based investment firm, who planned to restore and reopen the theater. However, that did not come to pass and the building was sold again. A number of retail stores have occupied the former lobby space, but have since closed. The theater remains unused.

Large pieces of the plaster ceiling have fallen on to the balcony.

One of the last projectionists at the Adams left behind a change of clothes. 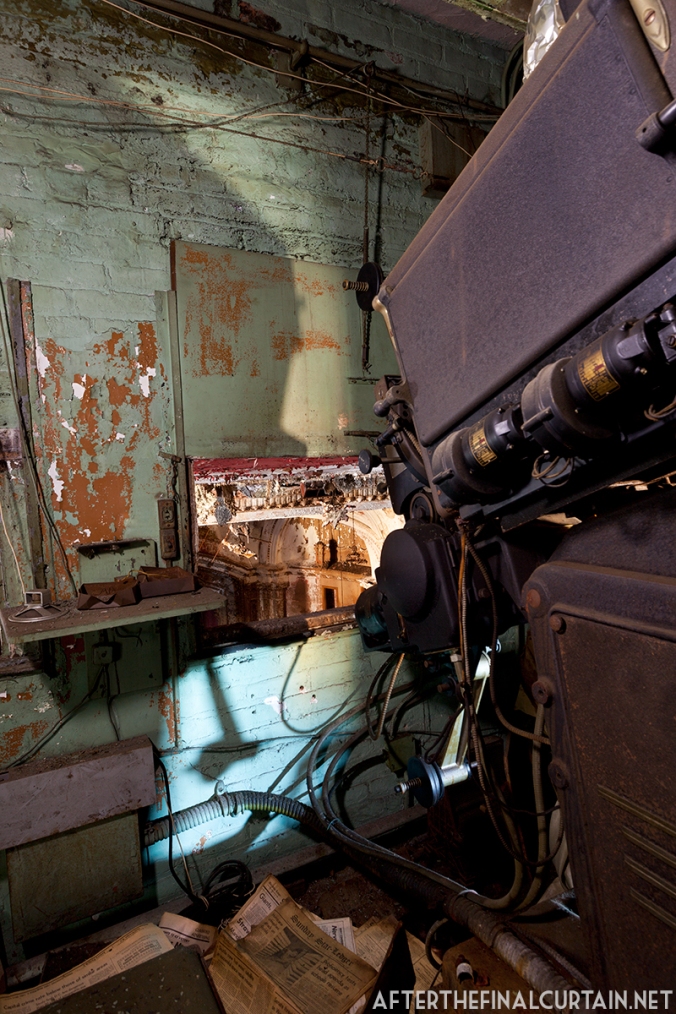 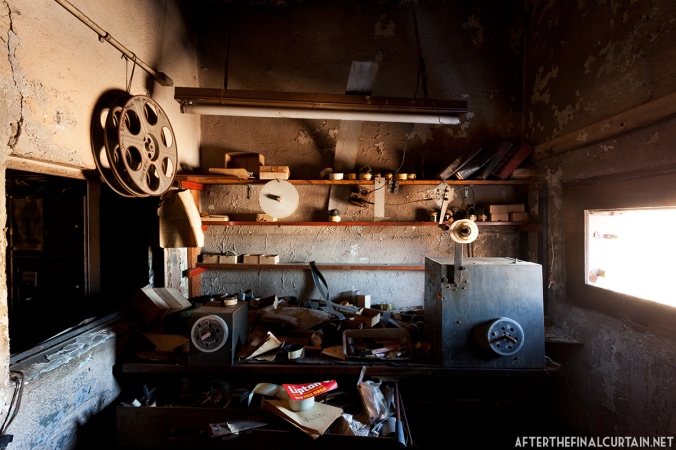 The film rewinder was most likely installed during the 1957 renovation.

If you’d like to help with my exploring/research efforts, please consider purchasing a print, all support is very appreciated.