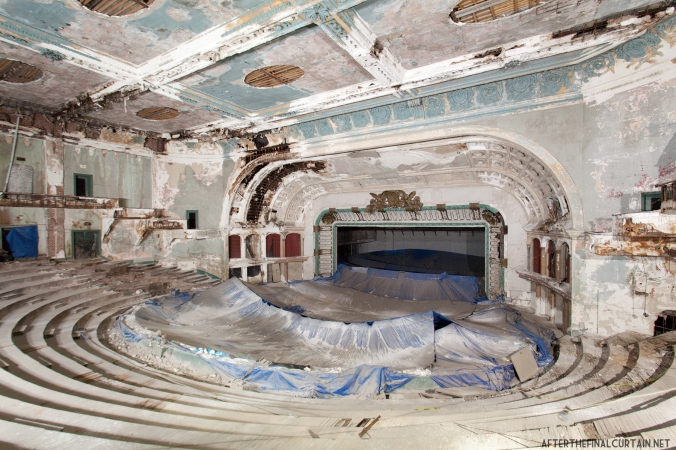 The plasterwork at the top of the proscenium arch depicts two angels surrounding the state seal of Pennsylvania. In the center is the word Liberty, part of the state’s motto.

The MET occupied the building until 1920, after which several opera companies used it until the mid 1930s.  Over the years, the building went through many different uses, including as a movie theater in the late 1920’s, a ballroom in the late 1930’s and a sports arena in the 1940’s. The theater was then purchased by a reverend in 1954, who turned it into a church. The Met Church was very popular, often filling the mezzanine and the upper balcony. Over time the church’s congregation decreased, the owners were no longer able to keep up with repairs, and the building began to deteriorate. 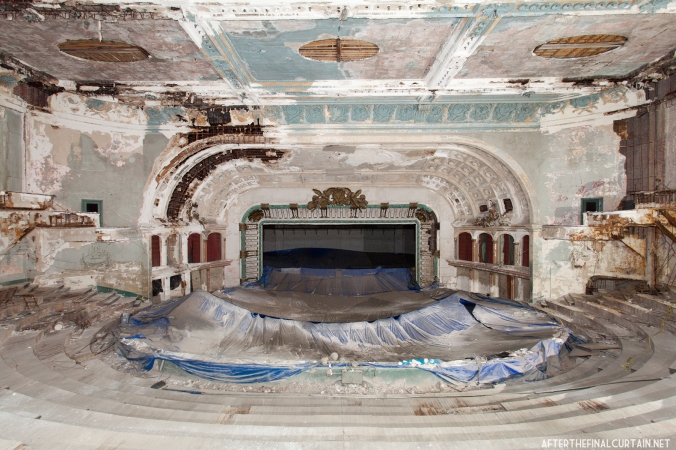 The blue tarp was put in place to protect the church floor from falling plaster.

In 1988, the church was forced to close due to serious disrepair. It remained abandoned until 1995 when it was purchased by the Reverend Mark Hatcher, Jr. and the Holy Ghost Headquarters, another church. The Holy Ghost have repaired some of the building, but due to the condition of the walls and the balcony level ceiling, they were forced to place a reinforced tarp between the balcony and main levels. Reverend Hatcher has attempted to raise money to restore the building, and in 2012 it was announced that the church had teamed with Philadelphia developer Eric Blumenfeld to develop a plan to restore the theater. The Met is currently undergoing a 56 million dollar renovation and will reopen in December 2018.