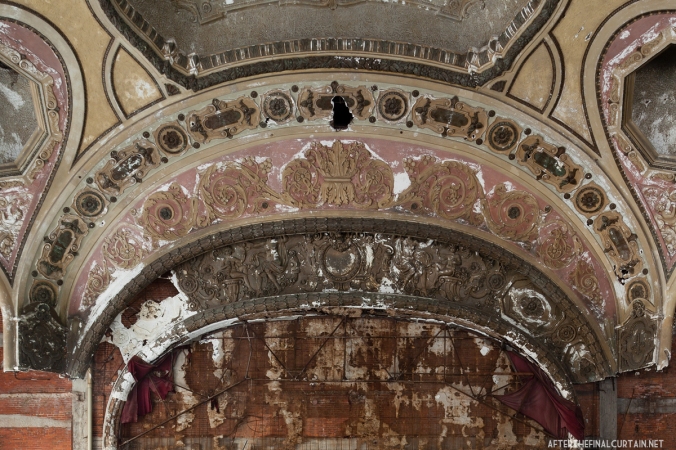 Built on the site of Henry Ford’s first garage, the Michigan Theatre opened on August 23, 1926 in Detroit, Michigan. The 4,038 seat theater was designed by Chicago-based theater architecture firm Rapp & Rapp (also known for the Kings Theatre in Brooklyn) for the Balaban and Katz Theatre Corporation. 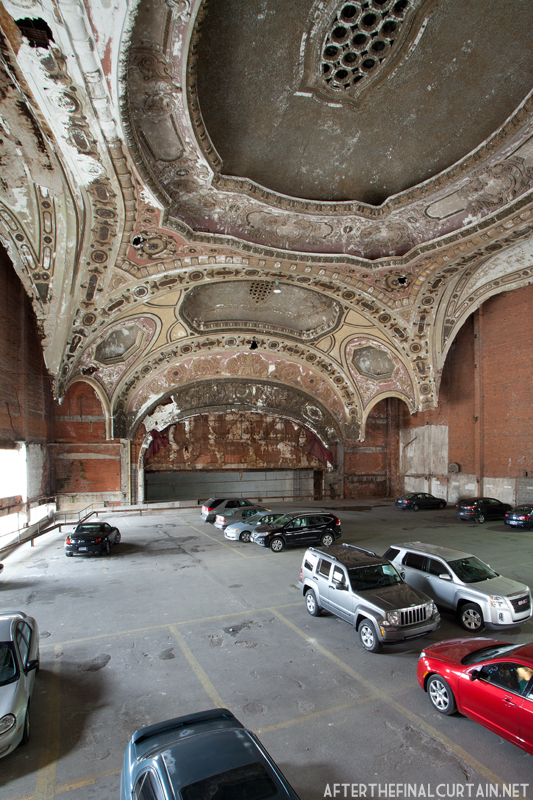 View of the proscenium arch and part of the ceiling from the back of the auditorium.

As with many other theaters at the time, the Michigan opened as a silent film theater and was later converted to show “talkies.”  The first motion picture shown with sound was “Sawdust Paradise,” starring Esther Ralston, Reed Howes and Hobart Bosworth. In addition to showing films, the theater was also used as a live performance venue. Some of the greatest performers of the day played there, including Bob Hope, the Marx Brothers, Duke Ellington and Benny Goodman. The live performances were discontinued in the late 1930s when the Michigan began showing only movies. 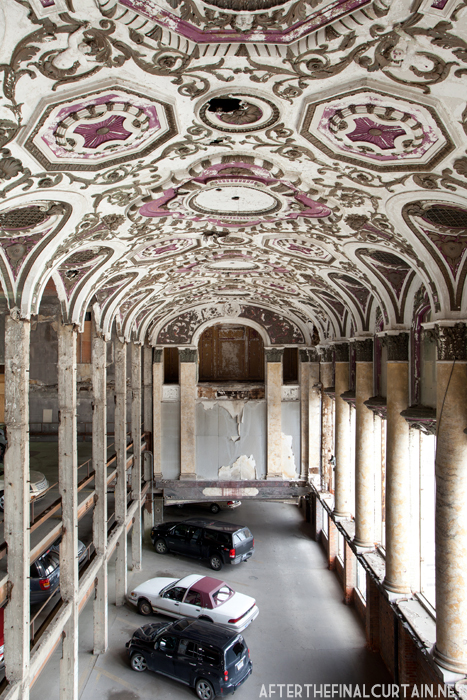 The lobby ceiling is one of the few things that survived the transformation into a garage.

The Michigan closed in 1967 due to declining ticket sales. It was reopened a few months later by Nicholas George, who owned and operated 11 theaters in the Detroit area. George made renovations to the theater, but it ended up closing again after just three years. Live performances returned in 1973 when the theater was converted into a 1,500 seat supper club and renamed the Michigan Palace. The club was not successful and closed a few months after opening. 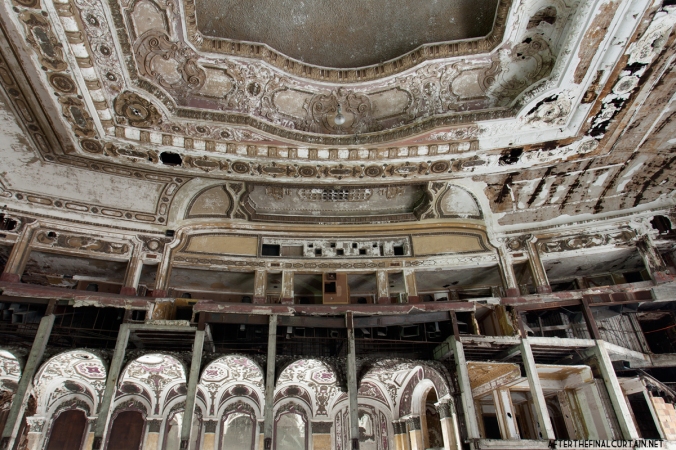 Most of the balcony was removed to make room for the top level of the parking garage.

It later became a concert venue and hosted shows from many famous bands, including Aerosmith, Rush, Bob Seger, David Bowie and Blue Oyster Cult.  Its years as a concert venue took a toll on the theater and much of the interior decor was damaged. The theater closed for the last time in 1976 due to a dispute between the building’s owners and the concert venue management over the damage to the theater. 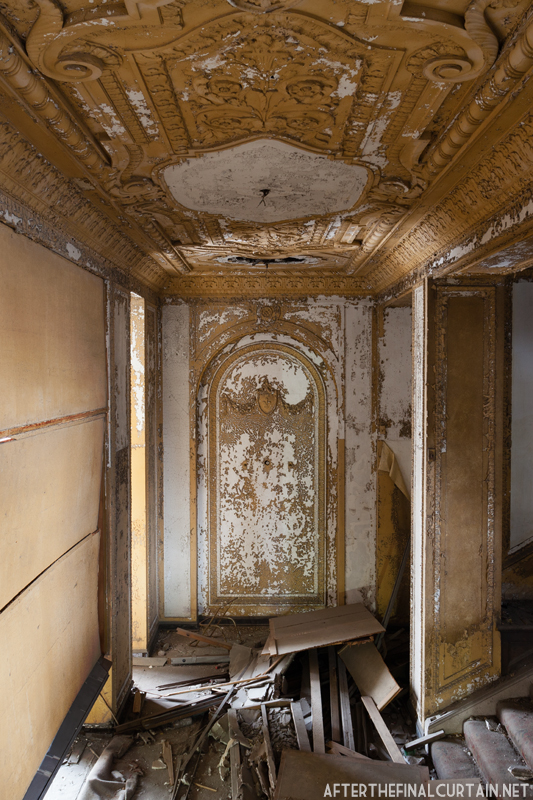 The landing inside one of the surviving stairwells.

Plans to demolish the theater were halted when demolition studies revealed that if the theater was demolished the structural integrity of an attached office building would be compromised. The inside of the auditorium was then partially gutted and a three-storey parking garage was built inside. The only remaining parts of the original theater include the ceiling, proscenium arch, part of the upper balcony, the projector room, the lobby ceiling and the ticket booth. The Michigan is still in use as a garage, and has been featured in a number of movies set in Detroit, including “8 Mile” and “Alex Cross.” 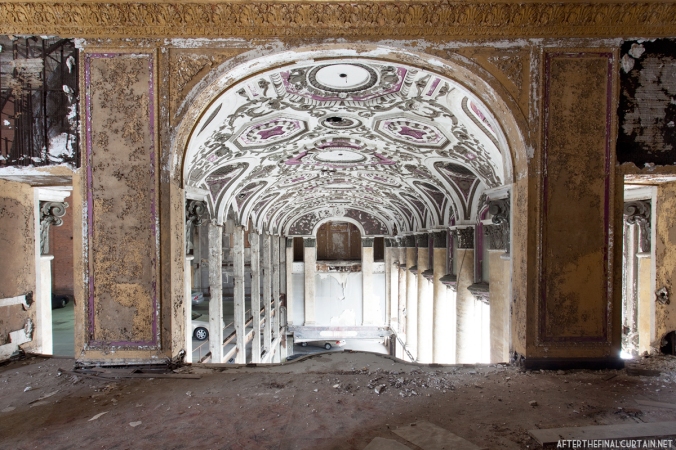 Another view of the lobby ceiling. 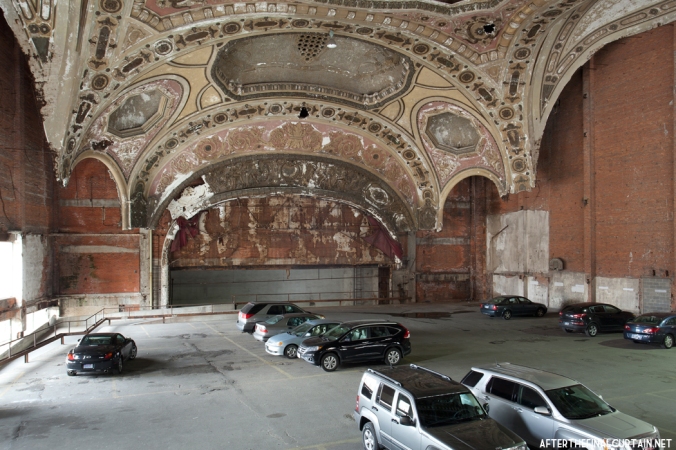 A look at the remains of the auditorium from the back of what used to be the balcony. 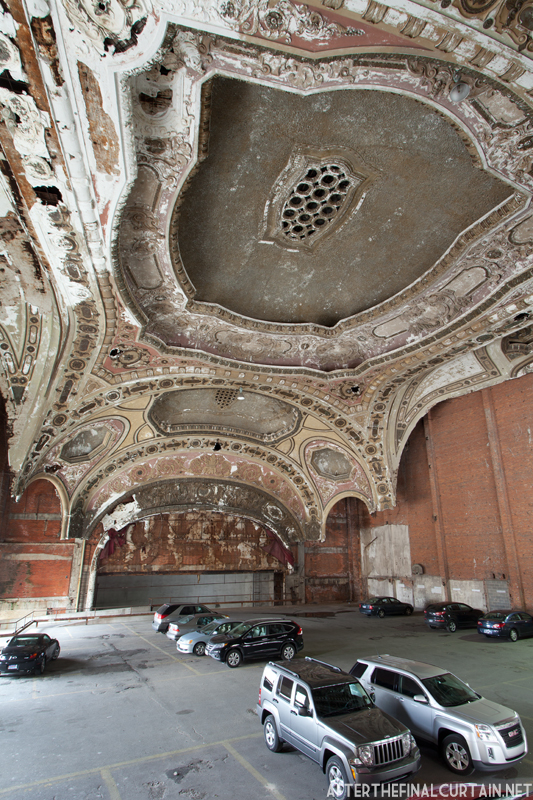 18 thoughts on “The Michigan Theatre”