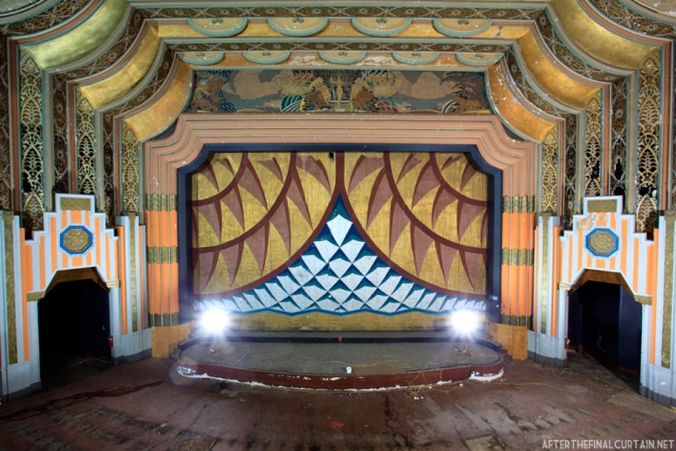 After photographing the Boyd Theater I learned a little bit about the Friends of the Boyd.  I had a lot of questions, and luckily the group’s president and chairman Howard B. Haas was available to answer them.  Below are his responses to several questions about the history of the Friends, his own personal experiences with the theater and some of his hopes for the future.

1. Who are the Friends of the Boyd?

“The Friends is a nonprofit organization which organized in 2002 to ensure the survival, restoration and reopening of Philadelphia’s last premiere movie palace, the Boyd Theatre. We aim to assist with restoration and with a film program, public tours, and exhibits of the movie palace’s history.”

View of the ceiling and proscenium arch from one of the entryways to the balcony level.

2. What initially drew you personally to the Boyd Theatre?

“When I first entered the Boyd Theatre in 1988, I was amazed by the beautiful Art Deco features. I was shocked to find that there was a notice of demolition sticker on the front door, which was part of the decades long saga of this historic building. I joined the Theatre Historical Society of America and visited other movie palaces nationwide that had been saved, restored, and are again well loved venues. Radio City Music Hall and many other former movie palaces were faced with demolition threats until communities stepped up to save them.” 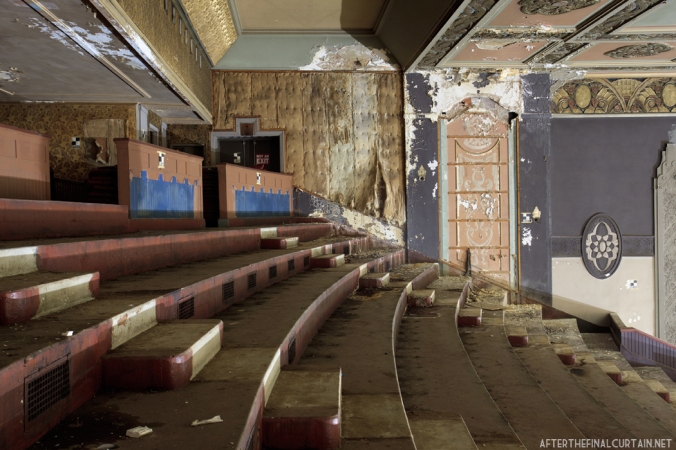 Some of the wall panelling has been removed to show the soundproofing materials on the balcony level of the theater.

3. The Boyd has a lot of history behind it; what is your favorite story about the theater?

“At the 1993 world premiere of the movie “Philadelphia” at the Boyd (then known as the Sameric) movie star Tom Hanks remarked “Oh, a real movie theater” when seeing how impressive the theater was.”

View from the balcony of the Boyd Theatre

4. How have the Friends of the Boyd helped the Boyd Theater stave off demolition?

“We appealed the demolition permit in 2002, held protest rallies outside the theater, and gathered 5.000 signatures on a petition and presented it to then Mayor Street of Philadelphia. We drew so much national attention to the Boyd’s plight that in 1998 the National Trust for Historic Preservation included the Boyd Theatre in its list of the 11 most endangered places in America. Along with our allies, in 1998, we successfully petitioned for the City of Philadelphia to legally protect the Boyd’s exterior from demolition. Closed since 2002, the Boyd won’t really be really be saved from being demolished until it is restored and reopened for public enjoyment!” 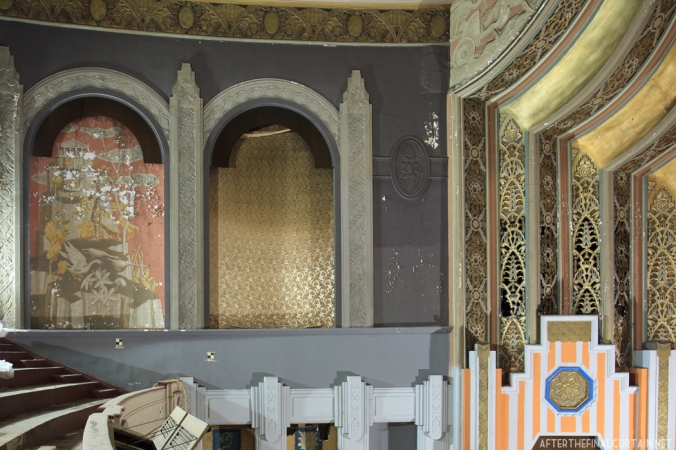 A closer look at some of the auditorium details.

5. What do you think would be the best use of the space going forward? (i.e. return to a movie theater, performing arts center, etc)

“Friends of the Boyd were overjoyed in 2005 when Clear Channel purchased the Boyd with intent to fully restore it and reopen it primarily for Touring Broadway musicals, but sadly Clear Channel soon divested all its theaters to a new company which put it up for sale. We were happy again in 2008 when local Philadelphia developer Hal Wheeler announced his intent to purchase the Boyd to restore it for various entertainment and for events associated with a hotel he was going to build, but sadly he passed away before he could do so. In short, we would be pleased with uses that would fully restore the Boyd and be consistent with our mission so that the public can once again enjoy entertainment including film festivals and movie premieres in the Boyd Theatre. Frankly, considering government budgets at this time, we need an angel, a philanthropist who wishes to rescue a historic landmark movie palace!”

All of the seats have been removed from the auditorium.

5 thoughts on “Q&A with Howard B. Haas, President of Friends of the Boyd”