The Lansdowne Theatre opened on June 7, 1927 in Lansdowne, Pennsylvania (a suburb of Philadelphia). The 1,381 seat theater was designed by William H. Lee, a Philadelphia based architect known for the recently renovated Queen Theatre in Wilmington, Delaware.

The patterns on the auditorium ceiling were based on the Roman emperor Nero’s Domus Aurea palace.

The Lansdowne was operated by Herbert Effinger of the Stanley-Warner (later Warner Brothers) circuit.  Opening as a silent film theater, the Lansdowne’s first film showing was “Knockout Reilly,” starring Richard Dix.  In addition to its use as a silent film theater, the Lansdowne was also used as a venue to live events, such as charity benefits or live music.  At the height of the silent film era, a Kimball 3Manual/8Rank organ was installed in the Lansdowne and was first played by the renowned organist Leonard “Melody Mac” MacLean.  Although the organ was once regularly used, it sat unplayed for 25 years after the silent film era. It was restored in 1963 and eventually sold in the late 70s to help pay for air conditioning repairs.

The theater was sold in 1986 to the Lansdowne Theatre Associates, Inc, who closed it for renovations for most of the year. It reopened and was quickly closed again after an electrical fire broke out in the basement of one of the building’s retail storefronts. No one was injured, but the electrical system was destroyed. The Lansdowne Theater Associates were never able to raise the money to repair the damage and the building was seized by the Bell Savings and Loan Bank in 1989.

The interior of the theater was decorated in a Spanish revival style.

The building was purchased in 2007 by the Historic Lansdowne Theatre Corporation, a non-profit organization dedicated to reopening the theater. They have since made repairs to the storefronts and office spaces and plan to reopen the theater in the near future. The Corporation intends to use the Lansdowne as a performing arts venue to host concerts, theater and dance performances. Donations to help restore this theater can be made at www.lansdownetheater.org 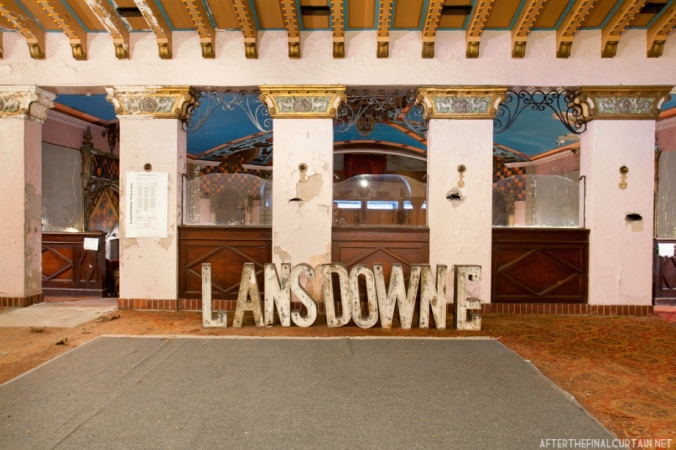 Marquee letters in the lobby of the theater.

Another view of the auditorium.

The main entrance to the Lansdowne Theater. 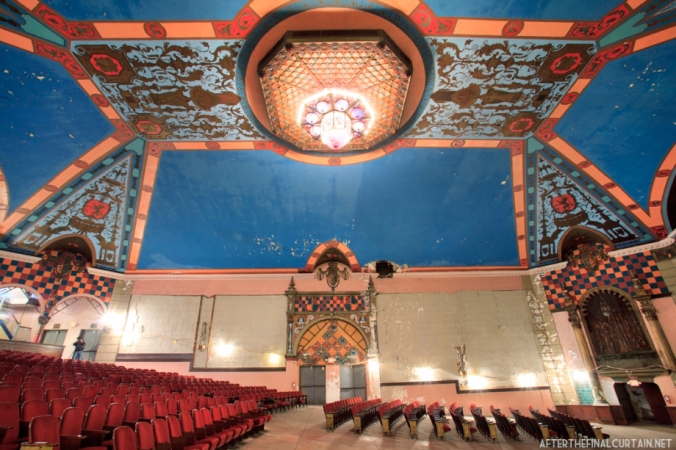 The chandelier still works twenty-five years after the theater closed. 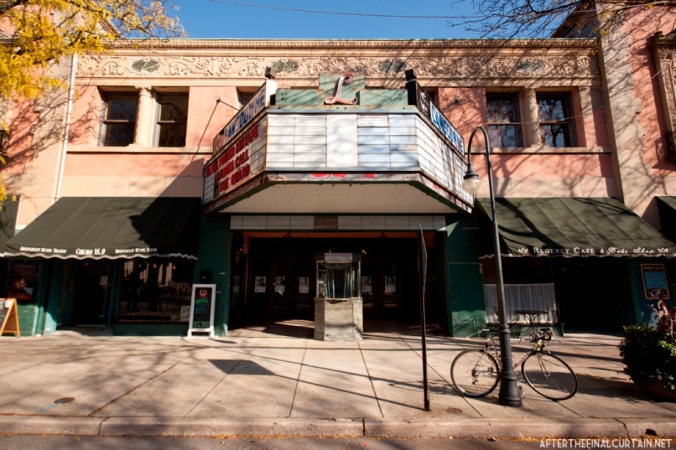 The front of the Lansdowne Theater building.

11 thoughts on “The Lansdowne Theatre”