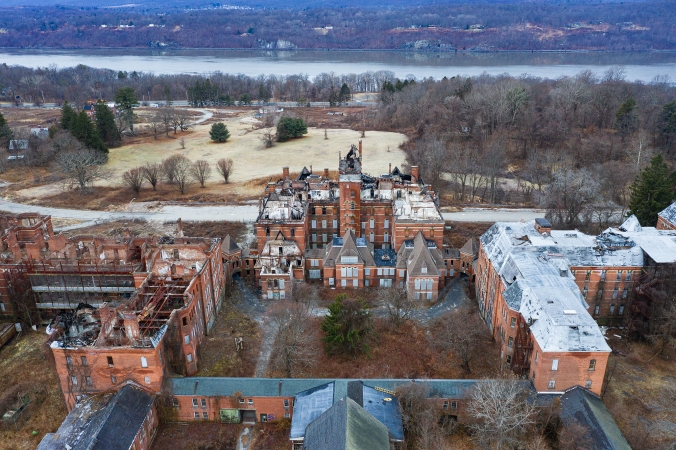 I’ve been working on a new project and could use some help from you guys. I’ve traveled across the country photographing abandoned buildings and have told some of their stories on this site. The project I’m working on is kind of a continuation of that.

I grew up in Dutchess County, NY which is the home of quite a few interesting abandoned locations, including the Hudson River State Hospital. I heard quite a few stories about that place over the years. One that has always stuck in my head was about a patient going missing from the hospital only to be found a day later with a shovel at the grave of FDR in nearby Hyde Park, NY. When asked what he was doing the patient replied, “I needed to ask President Roosevelt a question.”

Did that actually happen? I don’t know, and that’s a large part of what this new project will be about.

So, here’s how you can help – Tell me the stories you heard about the abandoned buildings in your area. It doesn’t have to be an old hospital. It could be a creepy looking forgotten house, or an old industrial building. Either reply to this post, or send me an e-mail at matt@mlambrosphotography.com. I’ll reach out for more information if your story is picked, and you may be featured in the new project.

(Don’t worry – AtFC isn’t going anywhere, and there will be another theater post on here shortly.)

I’m going to be in a movie! I was interviewed in the lobby of the Loew’s Jersey Theatre in Jersey City, NJ in 2016 for a documentary on the history of the American Movie Palace. I spoke with the director, April Wright, for at least an hour, and some of my ramblings made it into the finished film (and the trailer below.)

I was able to view a rough cut of the film at the Million Dollar Theatre in Los Angeles during the Theatre Historical Society Conclave in 2017, and really enjoyed it (I’m probably a bit biased.) If you’d like to see the film here’s some upcoming screening dates and locations:

I’ll be appearing at the Somerville, Lake Placid Film Festival, and the Centre Film Festival to promote the film. Some of my work will be exhibited, and depending on the location there will be a short talk/ Q&A.

Here’s the synopsis for the film:

“Other countries built palaces for royalty, in the United States we built them to watch movies.

The 100 year history of how the American movie experience evolved so quickly from nickelodeons to the studio system and huge movie palaces of the teens and twenties and their eventual decline through present day including current preservation efforts.

What started as individual entertainment in penny arcades moved to a shared experience in nickelodeons.  Next, when movies evolved from a lower class entertainment to mainstream, large movie palaces were built and the studio system grew in the teens and twenties.  All of the grand movie palaces were built in a very compressed period of time between approximately 1915 with many converting from Vaudeville, through the early 30s. The addition of sound spawned the golden age of cinema in the 30’s in these architecturally gorgeous theaters in metropolitan areas which thrived as an escape from the great depression. ​

After World War II, television became popular and single screen theaters followed on main streets everywhere as a result of suburban sprawl and the baby boom.  This led to a sharp decline in the downtowns of American cities. The classic theatres were too large and expensive to maintain.  By the 70’s they tried to survive with exploitation films and alternative programming.  Often these palaces were split or multiplexed.  But more often, they closed, and were allowed to decay. In a country that is synonymous with the film industry, we have allowed our history to be lost as we’ve demolished many of our country’s palaces.

But many individuals have worked tirelessly to preserve, restore and maintain this piece of history so it can be enjoyed by future generations.  However, many still stand in the balance, waiting for the funds to bring these landmarks back to life. “

1. Who are the Friends of the Historic Variety Theatre?

“The Friends of The Historic Variety Theatre are a group of local, concerned residents, business people and experts in historic properties.”

A broken water fountain in the back of the auditorium.

2. How did you get involved with the restoration of the Variety Theatre?

“As Westown Board of Directors Vice-President at the time, and area resident- in 2007 not long after the Variety Board was formed- I was asked to take a position for outgoing board member Chad Dasher (Westown’s Executive Director) to report activities and updates back to Westown’s Board, in addition to the fact that I’m a BIG historic building preservation buff.”

One of two light fixtures that remain hanging on the balcony level of the theater.

3. Why is it important that the theater be renovated?
“The building complex is a classic example of 20th century neighborhood investment. A “city within a city” if you will. As an “Economic Engine” this complex of Theatre, apartments and storefronts can be the center of neighborhood redevelopment- bringing back the area with economic activity and vitality and just like the spokes of a wheel- spurring additional investment in the area.
The beauty of the original space just simply must not be lost and could never be replicated in this day.”

Some of the original seats remain on the main level of the auditorium.

4. How are the Friends of the Historic Variety Theatre raising money for the restoration of the building?
“Currently, through small fundraisers and continuing awareness campaigns-several “pop up” events bringing people, residents and local merchants and artists together to see what great potential the neighborhood has. Additionally, we continue to have interest into “ghost hunts” by local and state groups wanting to tour the space and have developed a “tour fee” structure to help pay re-curring bills in the short term as we work out the final financing package with the bank to settle the financial difficulties we’ve encountered-as we work to gain “clear title”.
Once resolved- we can push for the larger fundraising drives needed to push the project to completion.” 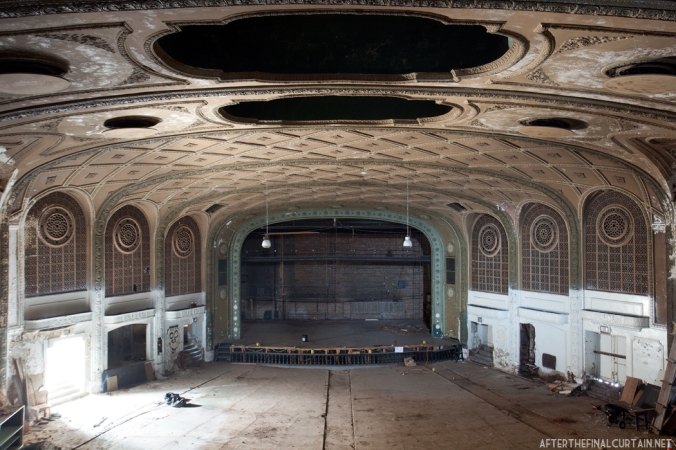 5. What is your favorite personal memory about the theater?

“While I came into the Variety’s life in it’s later years- I remember the throngs of people who would come for a movie or a live show-to relax and enjoy the beauty of “The Lady on Lorain”.
It is perennial and cross-generational. The Variety is a GEM and crown jewel of this neighborhood and while she’s a bit tarnished- she will shine again. I remember those crowds and I continue to want to be part of the solution and help restore the beauty and granduer of this wonderful palace of entertainment for all to enjoy.”

More information can be found at the Friends of the Historic Variety Theatre website: http://varietytheatrecleveland.com/

One of the original chandeliers that hangs in the entryway. 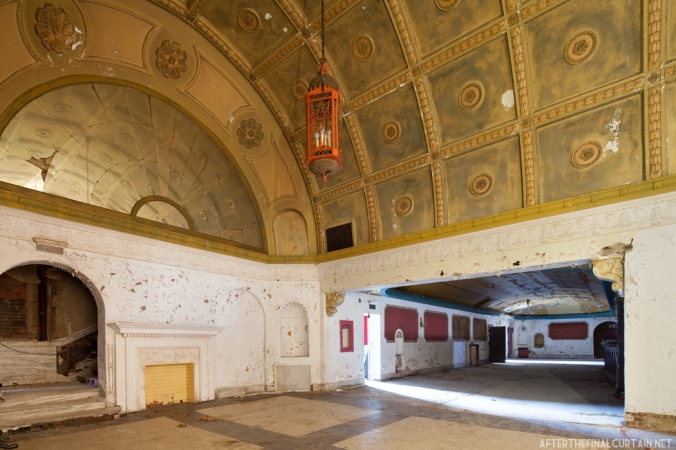 The lobby of the Variety Theatre.

The bottom sides of the auditorium were painted white when the theater was in use as a wrestling gym.

After photographing the Boyd Theater I learned a little bit about the Friends of the Boyd.  I had a lot of questions, and luckily the group’s president and chairman Howard B. Haas was available to answer them.  Below are his responses to several questions about the history of the Friends, his own personal experiences with the theater and some of his hopes for the future.

END_OF_DOCUMENT_TOKEN_TO_BE_REPLACED

I’m pleased to announce that I’ve joined the creative team of Popcorn Palaces, an upcoming documentary that will cover the rise, fall and rebirth of some of America’s greatest theaters!

“Once upon a time, the theatre in which you saw a movie could be just as special as the movie itself. The theatres that America built in the 20s and 30s were extravagant, exotic fantasies designed to transport the audience into another world. The show started on the sidewalk the moment you saw the theatre’s towering sign, outlined in thousands of flashing, chasing lights, spelling out the words PARAMOUNT or FOX or LOEW’S. You had found your way to an acre of seats in a garden of dreams. “Popcorn Palaces” will not only be a celebration of America’s moviegoing legacy, it will also be the story of how theatres today are striving to develop new audiences. Long before there was a multiplex or HBO or Netflix, the ritual of going to the movies provided us with a gateway to a new and deeper understanding of ourselves and our world. Today theatres are priceless resources that are bringing new vitality and civic pride to our cities. Far from seeing themselves as a club for the aged, historic theatres have made educational outreach programs central to their mission. Theatres are part of our past. They are also a vital part of our future.”

Unfortunately, due to the death of Wally Coberg, the mind behind Popcorn Palaces, in 2011 the project was cancelled.

The Friends of the Embassy Theatre, Inc. is a 501c3 non-profit group dedicated to restoring and operating the historic Embassy Theatre. END_OF_DOCUMENT_TOKEN_TO_BE_REPLACED

I recently spoke with Lance Gunberg, a graphic designer and filmmaker who is also the president of Orpheum Rising Project Helpers or O.R.P.H, Inc., which is a non-profit organization dedicated to reviving the theater.