The fresco on the curtain is of a spanish villa.

The Palace Theatre opened on November 26, 1925 in Gary, Indiana.  The 3,000-seat atmospheric theater was designed by John Eberson, a renowned architect known for the design of the Paramount Theatre in nearby Anderson, Indiana.

The lobby area of the Palace Theatre

The Palace was originally a vaudeville house before it began showing only movies in the 1930s.  When the steel industry began to decline in the 1960’s crime steadily rose in the area, leading to, among other incidents, the 1968 stabbing of a man in the crowded Palace lobby.  The Palace closed for the first in 1972. It reopened three years later as the Star Palace Theatre, but closed again when the owner could not afford to pay the utility bills. In 1976 it reopened for the final time as the Star Academy of Performing Arts and Sciences, but shuttered soon after when funds from a government grant used to reopen ran out.

The exit to the lobby area from the auditorium.

In 2002, Donald Trump had the marquee restored and the words “Jackson Five Tonight” placed on it as tribute to the band’s hometown.  The letters have since fallen off.  In the years since the marquee restoration many have tried — without success — to restore and reopen the Palace.

View of the balcony level from the stage area.

Some of the few remaining seats on the balcony. 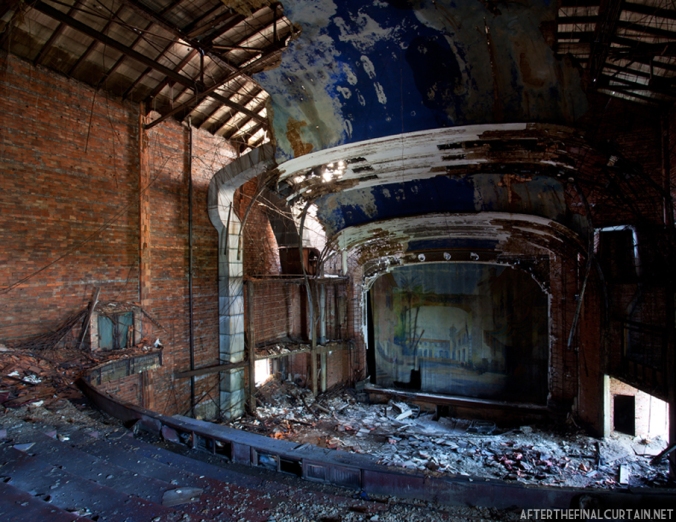 Another view from the balcony.

3 thoughts on “The Palace Theatre”

Join 28,832 other followers
Follow After the Final Curtain on WordPress.com