Our mission statement is:

The mission of the Friends of the Embassy Theatre, Inc. is twofold: first, to renovate and restore to its original beauty the historic Embassy Theatre in Lewistown, Mifflin County, Pennsylvania; and second, to provide community based arts programming at various venues in the downtown and (in the future) within the theatre as well. Once completed, the Friends will operate the theatre as a combined movie theatre and community/cultural arts center for the region. In addition to programs sponsored by the Friends, the complex will be available to individuals, groups, organizations, businesses and industry on a rental basis. 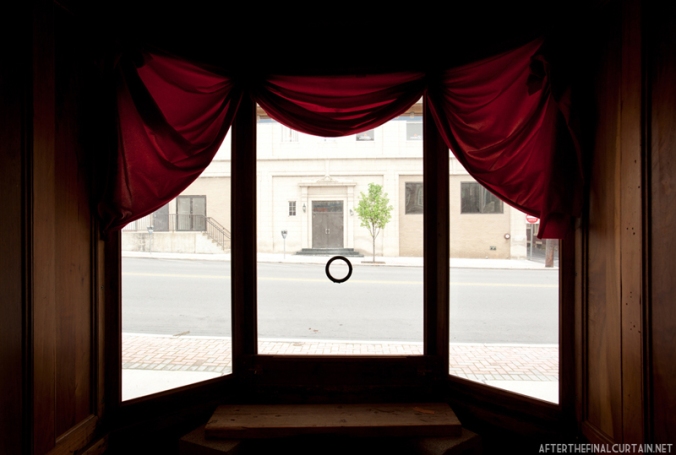 The interior of the restored ticket booth

What initially drew them to purchase and restore the Embassy?

In 1991, the Embassy was to go on the auction block, and there was a real possibility the building would be gutted for another use, or torn down. Several local citizens organized and raised enough funds to be able to purchase the theatre at the auction. There was a large crowd of locals who came there, and it was obvious they didn’t want to say goodbye. It has been 20 years since the auction, and the slow process has made it challenging to bringing the theatre back. 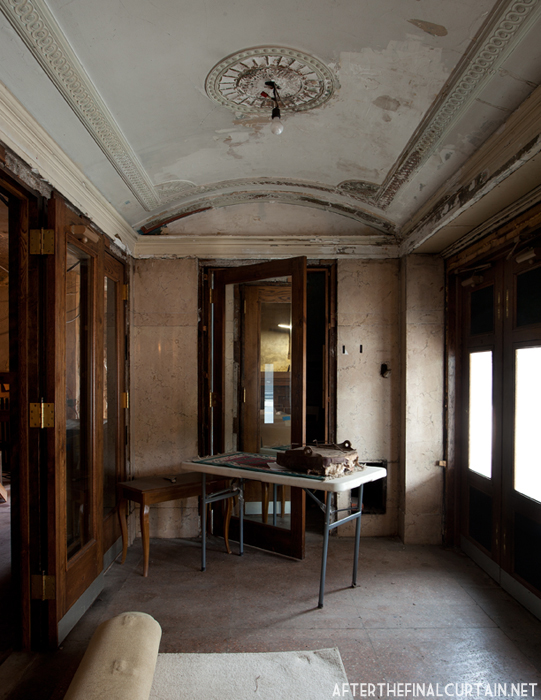 This closet was used as a snack booth while the theater was open.

The Embassy has a lot of history behind it; what is your favorite story about the theater?

There were two other theaters in town during the Embassy’s period of historic significance 1927 – 1946. One of the Rialto, which exhibited Paramount, MGM, and Universal (after 1942) films. The other was the Pastime, which was fondly remembered by many as a place of their childhood. The Pastime exhibited mostly westerns and second runs at the time. The kids loved the westerns. It is said, that the only adults in the Pastime on a Saturday afternoon was the theater staff. Hapless parents wondered the aisles looking for their kids who fell asleep inside and missed dinner. The pastime and Rialto were handsome theaters, but not as ornate and luxurious as the Embassy. Many people described it this way. “When you were a kid, you spent your Saturdays at the Pastime. As a teen, you went with your friends to the Rialto, but if a young man wanted to impress his girl, he took her to the Embassy and paid the extra 20 cents to sit on the balcony.” 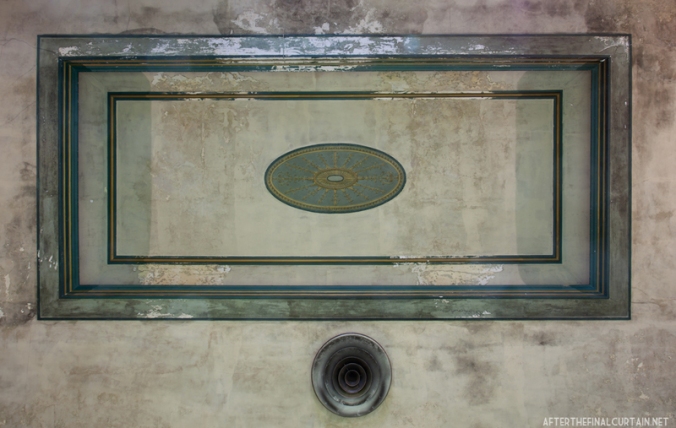 The ceiling of the auditorium

What are some of the ways the Friends of the Embassy are raising money for the restoration?

Most of the fundraising currently undertaken is to maintain the overhead expenses. This includes a week long carnival. In order to do the work on the building, significant funds will need to be raised. So far, this has been funded mostly through grants. It is hoped that as work begins in the interior, larger donors will come forward in a capital campaign.

How much work is left to complete?

Basically, all the planning and studies are completed. We are set to begin work to complete rehabilitation work on the exterior, including side and rear walls, a new roof, installation of new fire doors, and new base granite on the front.

For more information check out the Friends of the Embassy website at http://www.embassytheatre.org/

Some of the theaters original decorations are in crates waiting to be restored.

A view of the theater from the right side of the balcony.

2 thoughts on “Q & A with Paul Fagley, President of the Friends of the Embassy Theatre”