The Paramount opened exactly one month before “Black Tuesday,” the day that the stock market crashed.

Originally billed in opening advertisements as “Springfield’s newest playground of pleasure,” the Paramount Theatre in Springfield, Massachusetts opened on September 29, 1929. In 1926, the Famous Players-Lasky Corporation, later known as Paramount Pictures Corp, signed a 14-year contract at $100,000 per year for the space at the former Massasoit Hotel and hired architect Ernest Carlson to design the theater. Carlson designed the Paramount for talking motion pictures, which were quickly replacing silent films. The 3,200-seat theater took three years to build, and cost $1,118,000 ($16 million when adjusted for inflation). A Wurlitzer 3/11 Opus 2011, Style 230 theater organ was installed prior to opening.

The lobby of the Paramount.

The opening week program at the Paramount consisted of the 1812 Overture performed by the New York Symphony Orchestra, Joe Alexander playing the Wurlitzer organ, a Paramount newsreel, and “Dance of Life,” a talking film starring Nancy Carroll and Hal Skelly. Like many other theaters of the time, entertainers often made appearances at the Paramount. At first it was as part of a vaudeville act, and later on to promote their films. Some of the stars that appeared at the theater included Ethel Barrymore, Jack Benny, Eric Von Stroheim, and Lillian Gish. The theater was operated by Western Massachusetts Theatres, Inc. (WMT), which was a division of Paramount Pictures. WMT also operated the nearby Victory Theatre in Holyoke, Massachusetts. The Paramount Theatre was WMT’s flagship theater until 1952 when the movie studios were forced to give up ownership of theaters by the verdict of the United States vs. Paramount Pictures Supreme Court case. 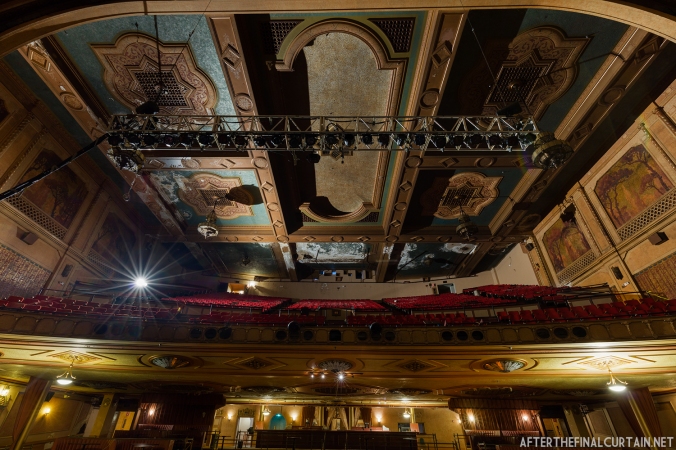 Movies were the main attraction at the Paramount until 1966, when musical performances and other live entertainment began to be regularly shown at the theater. In 1969, the Paramount closed for the first time. It reopened In 1975 and was renamed the Julia Sanderson Theater, after a Broadway actress from Springfield. Live shows continued at the theater until 1979, when it became a revival movie house, and its name was changed back to the Paramount.  A new screen, and a speaker system taken from the recently closed Victory Theatre, were installed. It closed for a second time in 1986, but was used occasionally until 1999.

The Massasoit Hotel closed in 1926 – a portion of it was converted into offices, and the remainder became the theater.

It was purchased by Paramount Realty Investment LLC/Creative Theater Concepts, who spent $1.3 million turning the theater into a nightclub/live performance space. It reopened as the Hippodrome Theatre in December 2000. The Hippodrome was a popular nighttime downtown destination for most of the 2000s. In 2011, it was purchased by the New England Farm Workers Council (NEFWC) for $1.7 million. They operated the theater sporadically until closing for good after a shooting in April 2015.  NEFWC intend to remove the nightclub alterations and reopen the theater as a live performance space, as well as restore the Massasoit Hotel into an 81-room boutique hotel. The estimated costs for the restoration are between $32 and $41 million. 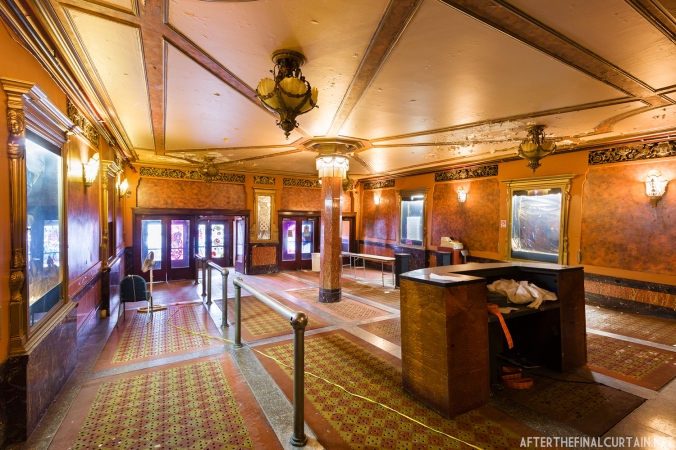 When it opened the Paramount had an air cooling system designed by Raymond S. Graham, which was the first of its kind in Springfield.

The theater was added to the National Register of Historic Places in 1979.

“Gone with the Wind” was the first film shown at the revival house.

A close up of the mural above the proscenium arch. 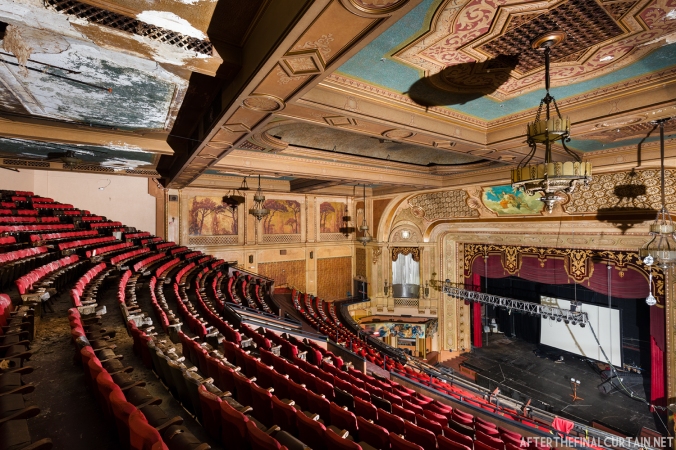 The Wurlitzer organ was restored during the 1999 renovation.

I’ll be hosting a photography workshop at the Paramount on November 4, 2017. For more details visit: http://www.mlambrosphotography.com/workshops/paramount-theatre-workshop