An expanded version of this post on the United Artists Theatre in Detroit, MI is in my new book “After the Final Curtain: America’s Abandoned Theaters.” For more information visit: http://www.afterthefinalcurtainbook.com 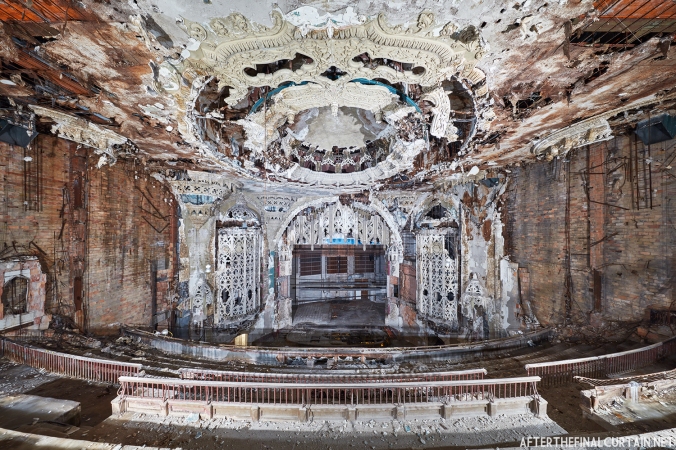 Designed by famed theater architect C. Howard Crane, the United Artists Theatre in Detroit, Michigan opened on February 3, 1928. It cost $5 million ($77.8 million when adjusted for inflation) to build the 2,070-seat theater and 18-story office building. Crane was hired by the founders of United Artist Pictures — D.W. Griffith, Douglas Fairbanks, Mary Pickford and Charlie Chaplin — to design the theater based on castles that Pickford and Fairbanks saw while on honeymoon in Spain. The theater’s Spanish Gothic interior was very similar in design to the United Artists Theatre in Los Angeles, California, which was also designed by Crane and had opened a little over a month earlier. An opening day advertisement in the Detroit Free Press called the theater “Old World Luxury combined with New World Comfort.” The feature presentation on opening day was “Sadie Thompson” a silent film starring Gloria Swanson and Lionel Barrymore. Swanson made an “appearance” via phone and spoke to the audience about the film. The United Artists was designed for feature films, though it did feature the occasional live show, and had a house orchestra as well as a Wurlitzer Opus 1824 theater organ.

The fire curtain can be seen in this close up of the proscenium arch.

The theater was closed for modernization in 1950; new projectors, a new screen and a sound system were installed in the auditorium, and a snack bar was installed in the lobby.  In January 1970, the United Artists switched to showing X-rated films. The first X-rated film shown was “Camille 2000”, an Italian movie starring Danièle Gaubert. The format change only lasted around three months and the theater returned to showing regular films on March 25, 1970. The United Artists changed formats a few times before closing on September 14, 1971 after a showing of “Sweet Sweetback’s Badass Song” starring Melvin Van Peebles. It reopened a few times over the next year — once as the Downtown Theatre —but closed for good in August 1972.

Decorative plasterwork covering one of the organ chambers.

Artifacts from the theater were auctioned off through DuMochelle Galleries on February 15, 1975; auctioned items included the lobby furniture, chandeliers, fountains, seats, and marble statues. The Detroit Symphony Orchestra began to use the theater as a recording studio in April 1978, but was forced to stop in 1983 due to the deterioration of the building. It was added to the National Register of Historic Places that same year. A number of plans, including demolishing the building to build a baseball stadium, were proposed over the years, but none came to fruition. 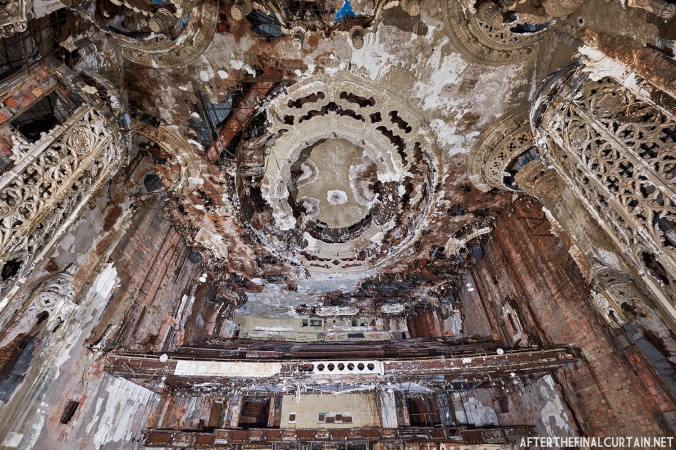 View of the auditorium from the stage area.

In May 2017, it was announced that the office portion of the building would be turned into 148 residential units with retail on the first floor. The developer intends to demolish the theater because according to Gershman Mortgage, who is providing $34.5 million for the project, a dilapidated theater or a restored one put the financing in jeopardy. Adam Hendin, a vice president at Gershman is quoted as saying “the theater building is dilapidated and not an attractive building to live next to” and “If the theater building gets renovated and becomes operational again, Gershman has concerns that this adjoining commercial, public use would disrupt the residential tenants and therefore make the project less attractive and less marketable as a going concern.”

Much of the first floor, as well as the stairs were covered in a thick layer of ice.

A close up of some of the decorative plasterwork in the auditorium dome.

If you enjoy After the Final Curtain consider supporting me on Patreon at https://www.patreon.com/afterthefinalcurtain?fan_landing=true There are some exclusive benefits, and you’ll be among the first to listen to my podcast when it launches very soon.

I received my copies of my new book After the Final Curtain: America’s Abandoned Theaters,  yesterday and it looks amazing! I’ll be shipping out the pre-orders starting today.  Each pre-ordered copy comes with a 5×7 print, ticket from Proctor’s Palace Theatre, and a USB drive with the After the Final Curtain logo courtesy of USB Memory Direct.  Here’s some more information from their website:

“USB Memory Direct specializes in custom-printed and custom shape USB flash drives. Being in business for over 15 years, UMD has gained a reputation for being one of the premiere providers of wholesale USB flash drives across the country. With a wide variety of drive styles to choose from, you’ll be sure to find a drive that you can customize to perfectly represent you and your brand. You can also rest assured knowing that they offer a lifetime guarantee on any and all drives you purchase from them. Check them out today and request a quote from one of their friendly and knowledgeable account executives.”

The pre-order package will be available until I run out of tickets, prints and USB drives. You can order a signed copy at my site: http://www.mlambrosphotography.com/store/after-the-final-curtain-americas-abandoned-theaters

Or a non-signed copy at:

Cover of After the Final Curtain: America’s Abandoned Theaters.

I took a bit of a hiatus from the site to finish this up, but now that I’m completely done I’m excited to announce that my third book is coming out this November!

“After the Final Curtain: America’s Abandoned Theaters” will feature 20 different theaters across the United States, including six exclusive ones, and a foreword written by Tim League, the founder of the Alamo Drafthouse Cinema chain.

If you pre-order it via my site you will get a signed copy with a ticket stub and a 5×7 print of one of the theaters in the book. It should ship around the first week in November.

The streets of small towns and cities across America were filled with the lights and sounds of movie theaters in the early 20th Century. The most opulent were known as “movie palaces,” which were designed to make their patrons feel like royalty; people would dress up to visit. But as time went on, it became harder and harder to fill the 2,000+ seat theaters, and many were forced to close.

Today, these palaces are illuminated only by the flicker of dying lights, and the sound of water dripping from holes in the ceiling echoes through the auditoriums. In “After the Final Curtain: America’s Abandoned Theaters,” internationally-renowned photographer Matt Lambros continues his travels across the United States, documenting these once-elegant buildings. From the supposedly haunted Pacific Warner Theatre in Los Angeles to the Orpheum Theatre in New Bedford, MA, which opened the same day the Titanic sank, Lambros pulls back the curtain to reveal what is left, giving these palaces a chance to shine again.

It’s also available to order on Amazon, Barnes and Noble, Indiebound or your local bookstore.

I’m in the beginning stages of planning a book/lecture tour to promote the new book, so if you want me to visit your area let me know!

Here’s a sneak peek at some of the theaters that will be in the the new book:

View from the side of the balcony at the Emery Theatre in Cincinnati, Ohio

The auditorium of the United Artists Theatre in Detroit, MI

View from the balcony of the Majestic Theatre in East St. Louis, IL. 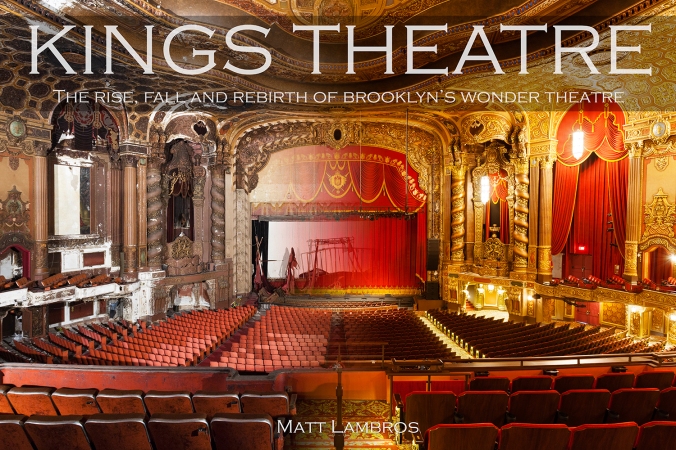 What was the original name of the Kings Theatre in Brooklyn? Is there a reason it was painted in red and gold? What famous architect almost designed the Kings? These questions and more are answered in my new book, “Kings Theatre: The Rise, Fall and Rebirth of Brooklyn’s Wonder Theatre“, which is available now!

It was published by the Theatre Historical Society of America, and contains never before seen historic and modern photographs of the Kings, as well as a complete history of the theater. The book can be ordered on Amazon and signed copies are available via my site.

After the Final Curtain: The Fall of the American Movie Theater is being released on November 15, 2016.

Hi Everyone – I’ll be speaking about my upcoming book, After the Final Curtain: The Fall of the American Movie Theater, at the Somerville Theatre in Somerville, Massachusetts on November 13 at 6:30 PM.

If you want to get a copy of my book a few days before the official release this is your chance. Tickets are only $5 and can be purchased here. Hope to see you there!

After the Final Curtain: The Fall of the American Movie Theater

I just received copies of my upcoming book, After the Final Curtain: The Fall of the American Movie Theater! I can’t wait for all of you to see it. It comes out this November and is available for pre-order on Amazon, Barnes and Noble and many other book stores.

I’ll be announcing some live events as we get closer to the book’s release date. Stay tuned!

Cover for After the Final Curtain: the Fall of the American Movie Theatre.

Remember in the last post how I said I had an announcement I was going to keep secret for the moment? Well, here it is – Jonglez Publishing is going to be publishing a book featuring my photography of abandoned theaters!

After the Final Curtain: The Fall of the American Movie Theater consists of 24 theaters from New York to California, including some that have never been posted on this site.

It’s being released on October 1, 2016 and can be pre-ordered at the following link: After the Final Curtain: the Fall of the American Movie Theater.

I’m very excited to announce that I’ve partnered with the Theatre Historical Society of America for my first book: Kings Theatre, The Rise, Fall and Rebirth of Brooklyn’s Wonder Theatre. The book will cover the entire history of the Loew’s Kings Theatre from it’s original construction to the reopening in February 2015.  I’ve photographed over 75 abandoned theaters over the past 5 years, and being able to document one being restored has been amazing. Every visit to the theater has been awe inspiring and I can’t wait to share what I’ve seen with all of you. 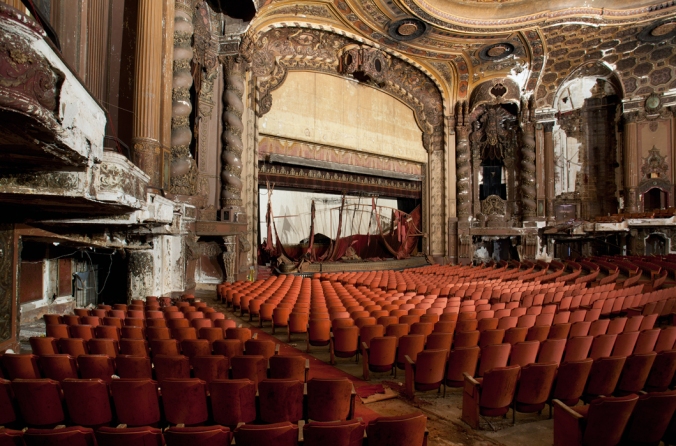 Thanks to everyone at THS, ACE Theatrical Group, Evergreene Architectural Arts, Martinez + Johnson Architecture and Gilbane Building Company for all the help bringing this project to fruition.

To order signed copies of the book visit: http://www.afterthefinalcurtainprints.com/product/kings-theatre-the-rise-fall-and-rebirth-of-brooklyn-s-wonder-theatre