The seats were removed from the auditorium when it was converted into a nightclub.

Billed in early newspaper advertisements as “The Pride of South Bend,” the 2,500 seat State Theatre in South Bend, Indiana opened on January 29, 1921 as the Blackstone Theatre. Construction lasted for 16 months and cost $500,000 ($6.7 million when adjusted for inflation). Henry L. Newhouse — an architect known for many theaters in the Chicago area — designed the building with a neoclassical exterior and a beaux-arts interior. Unlike many other theaters built during this time, the State did not have one traditional balcony; instead, it had tiered seating in the rear of the auditorium, and two small balconies on either side, beginning at the organ chamber and ending over the third tier seating section. Designed for silent motion pictures and vaudeville shows, the opening day feature was the silent film “Once to Every Woman,” starring Dorothy Phillips and a then-unknown Rudolph Valentino.

The Blackstone began to fall behind the times after the Colfax and Granda Theatres opened in 1927 and 1928, which both offered talking pictures. Rather than also show talking pictures and compete with the new theaters, the Blackstone Theatre stopped showing films and changed to burlesque. This was likely due to the cost of purchasing and installing the equipment required to show talking pictures. However, the City Government didn’t approve of burlesque shows, and Chester P. Montgomery, the Mayor of South Bend at the time, ordered the theater closed in early October 1929. It was taken over by the Publix (Paramount) chain who repainted the interior, reupholstered the seats, and reopened it on Christmas Day 1929 as the State Theatre.

The exterior of the State was designed in the neoclassical architecture style. A shootout between the police and John Dillinger in 1934 allegedly left bullet holes on the theater’s marquee and terra cotta facade.

Like many other theaters, the State was used for a range of events other than showing films including; school graduations, closed circuit telecasts and beauty pageants. The State closed again on November 3, 1977 due to declining attendance. In 1980, a crew from the Victorian Supply Company of Little Rock, Arkansas removed the 17-panel stained glass dome from the auditorium. The stained glass was taken back to Arkansas and refurbished for a prospective buyer — a restaurant owner from Dallas, Texas.

View of the auditorium from one of the small balconies.

The building passed through a number of owners in the 1980s and 1990s before it was purchased for $20,000 by the Watseka Theatre Corp. Watseka made $500,000 in repairs to the building, and reopened it as a second run movie theater on March 25, 1993. However, it couldn’t compete with local multiplexes and in October 1996, it changed formats and became a live music venue and nightclub. It closed again in 2005. The State was purchased by Banko Capitol, a real estate investment firm, and reopened as a performing arts center and cultural center in the Spring of 2013. After operating infrequently it closed again in September 2016 after the theater was sold at a county auction due to unpaid taxes. A grassroots organization called “Save the State Theatre SB” was formed by an Indiana University South Bend student in early 2019 to try and raise the funds to purchase and reopen the theater.

The projection room is full of equipment that was likely installed during the theaters stint as a second run movie theater in the 1990s. The film on the platform was 1997’s Starship Troopers.

Like many large theaters of the era, the State had its own orchestra, the 17-piece Blackstone Symphony Orchestra, which was led by 21-year-old Angelo Vitale, one of the youngest band leaders in America at the time. 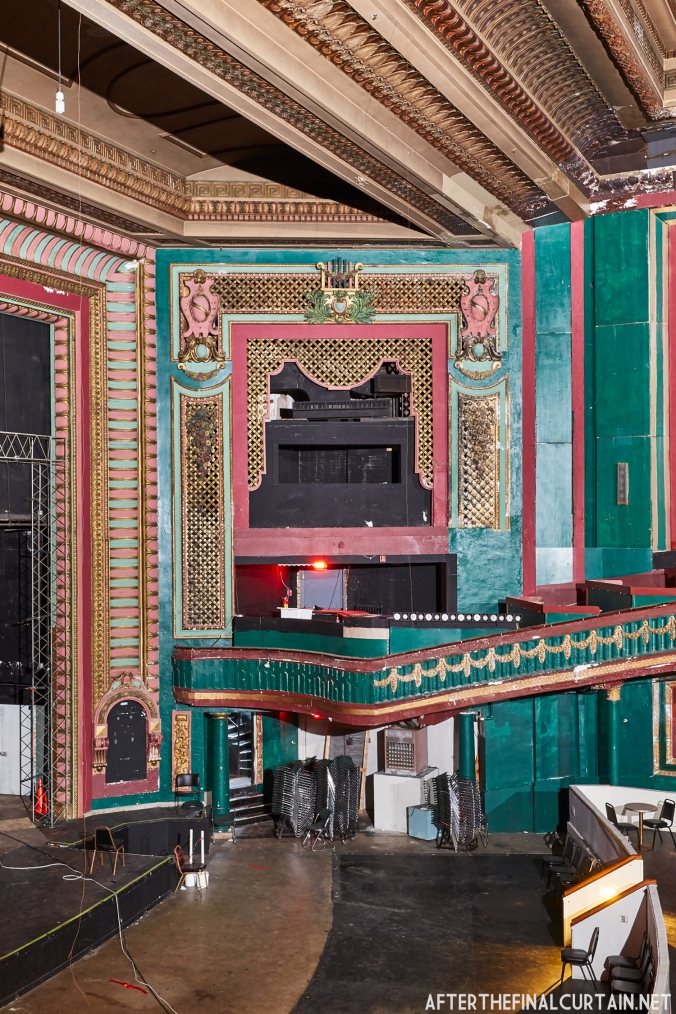 The organ chamber, which once held pipes for the theater’s Kimball organ, is now filled with a large speaker.

View from the rear of the auditorium.

View of the stage from one of the small balconies.