One of the things I hear the most is “Why don’t you take more photographs of the theater facades?” So while I was in Los Angeles last year for the Theatre Historical Society of America’s annual Conclave I made a point to do just that.

The Million Dollar Theatre opened on February 1, 1918. It’s one of the first movie palaces in the country and the first by Sid Grauman, who also opened two of the most famous, the Chinese and the Egyptian Theatres. CoBird, a fashion company, recently signed a lease to use the theater and the building’s storefronts. 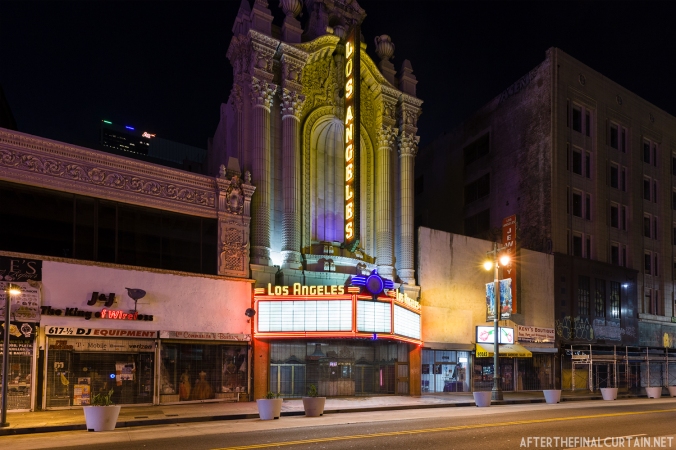 The Los Angeles Theatre opened on January 30, 1931. It was designed by famed theatre architect S. Charles Lee and Samuel Tilden Norton. Actor Charlie Chaplin helped fund the construction so that the theater would be open in time to premiere his film, “City Lights.” Currently the Los Angeles is most often used as a location for filming in motion pictures and television. However, it is open for special events such as a Night On Broadway, and the Los Angeles Conservancy’s Last Remaining Seats.

The Arcade Theatre opened on September 10, 1910 as the Pantages Theatre. It closed in 1992, and the lobby was converted to a retail space.

The Cameo Theatre opened in October 1910 as Clune’s Broadway Theatre. It closed in 1991, and the lobby was turned into retail space. The auditorium is currently used for storage.

The Roxie Theatre opened on November 25, 1931, and was designed by architect John Montgomery Cooper. It closed in 1989, and the lobby was divided into two retail spaces. The seats were removed from the auditorium and it remains vacant.

For more on these and many other Los Angeles Theatres be sure to visit: https://losangelestheatres.blogspot.com/