The Fox is one of the 22 theaters in my new book “After the Final Curtain: The Fall of the American Movie Theater.” Find out more here.

The Fox was the first theater in Inglewood to have air conditioning.

The Fox Theatre in Inglewood, CA opened on March 31, 1949. It was built on the site of the Granada Theatre which had been destroyed by a fire five years earlier. Fox West Coast Theatres (FWCT) purchased the site for $376,375.45 soon after the fire. Charles Skouras, the president of FWCT, requested that the theater be designed in a neo-baroque style instead of the more modern style which was typical of the late 1940s. To achieve they hired architect S. Charles Lee to design the building and Carl G. Moeller to design the interior. Newly low cost aluminium sheeting was used to create ornamentation that would have been much more expensive and harder to mass produce if created with plaster. Moeller went on to redesign a number of Fox’s pre-war theaters this way, which came to be known as “Skouras Style.”

View of the auditorium from the screen.

The 1008 seat Fox was the last theater to be constructed by 20th Century Fox before the Supreme Court Case the United States v. Paramount Pictures, Inc. The case, also known as the Hollywood Antitrust Case of 1948, decreed that movie studios were no longer allowed to own theaters and hold exclusive rights on where the films they produced were shown. Even though they no longer owned the theater, 20th Century Fox often held sneak previews of upcoming films at the Fox so they could observe people’s reactions to the movies. The Fox also had a soundproof room dubbed the “cry room” so that people could bring babies to the movies without disturbing the other patrons.

Much of the projection equipment was left behind when the theater closed.

“Mr. Belvedere Goes to College” starring Clifton Webb and Shirley Temple was the first film shown at the Fox. Webb and Temple both made appearances at the premiere along with an estimated 10,000 people crowding the streets around the building. The Fox changed hands and formats a few times, switching to exploitation, and finally spanish language films before closing in 1988. 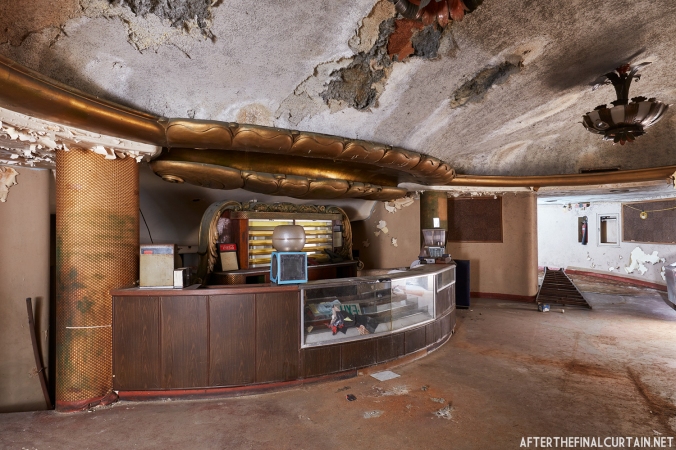 The Fox lobby and concession stand.

In 2009, the Inglewood Fox Theatre Alliance was formed to raise awareness and gain support for restoring the theater. Through their efforts the theater was listed on the National Register of Historic Places in January 2013. It was the second location in Inglewood to be added to the NRHP after the Centinela Adobe. The building is currently for sale. 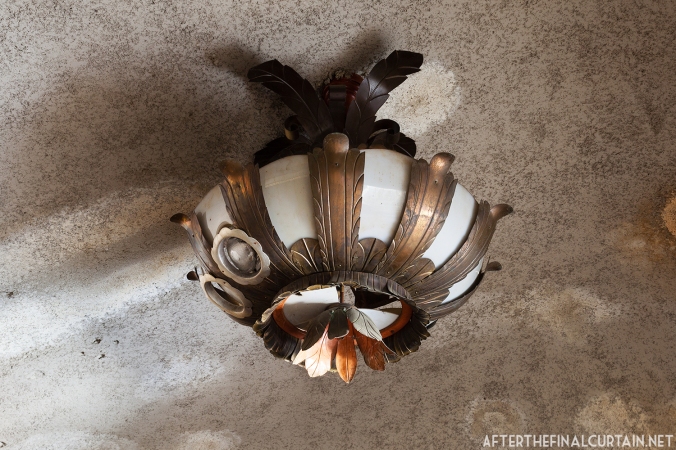 A close up of one of the original light fixtures in the lobby.

The original ticket booth has been protected from the elements by a plywood wall.

The interior of the Fox Theatre ticket booth.

The marquee is also partially protected by a plywood barrier. 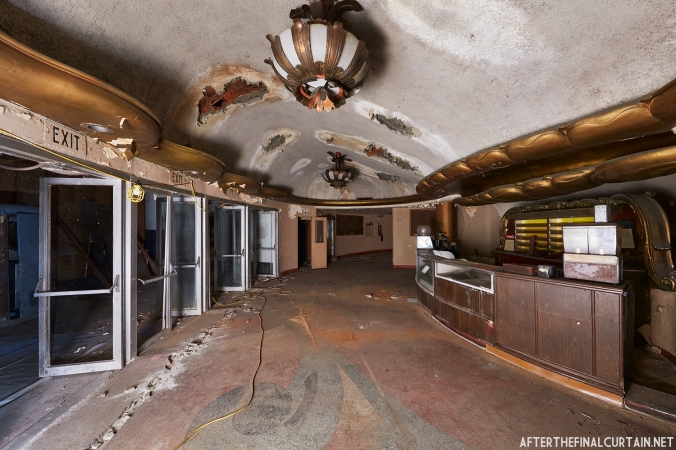