The Jayhawk is one of the 22 theaters in my new book “After the Final Curtain: The Fall of the American Movie Theater.” Find out more here.

The Jayhawk Theatre opened in August of 1926 in Topeka, Kansas.  It was built by local architect Thomas W. Williamson, and designed by the Boller Brothers. The Boller Bros. were known for designing hundreds of theaters across the country, using the Jayhawk design as a prototype. In addition to the theater, the building contained a hotel and a commercial arcade that connected the two sections.

The mural on the proscenium depicts Demeter, the Greek goddess of agriculture surrounded by symbols of Kansas’ history, including the state seal of Kansas.

The 1,500 seat theater was one of the first air conditioned theaters in Kansas. It took workers three months to install the $50,000 heating and cooling system. Billed as “Topeka’s first deluxe motion picture palace,” the Jayhawk Theatre opened showing silent films and vaudeville acts. In 1953, a CinemaScope screen was installed so that the theater would be able to show 3D movies.

The Jayhawk closed in May of 1976, only two years after it was added to the National Register of Historic Places. The hotel closed soon after, but was quickly renovated into an office building called the Jayhawk Tower. A developer tried to get a permit to demolish the building, including the theater, but was required to obtain approval from the Kansas Historical Society due to the theater’s National Historic Register status. They spoke against the demolition but didn’t deny the permit. Eventually, the owner of the building decided it would be too costly to demolish it.

The dome in the center of the auditorium used to contain a replica of the night sky complete with twinkling stars.

In January of 1993, a proposal to restore the theater was put forward by Rev. Richard Taylor. Soon, the Historic Jayhawk Theatre, Inc. was formed to help save the theater. Later that year the Kansas State Legislature named the Jayhawk as the State Theatre of Kansas.

The marquee letters were removed after the theater closed and moved into the auditorium for storage.

Later, in 1996, a local Boy Scout troop cleared out all of the debris for the theater’s 70th anniversary, and the public was allowed to view the theater for the first time in 25 years. Commercial space on the first floor of the building was donated to the theater in 1997. A group of local artists now use part of the space as a gallery, which they named the Upstage Gallery at the Jayhawk Theatre. The gallery has helped bring hundreds of people to the theater through art shows and live music performances. 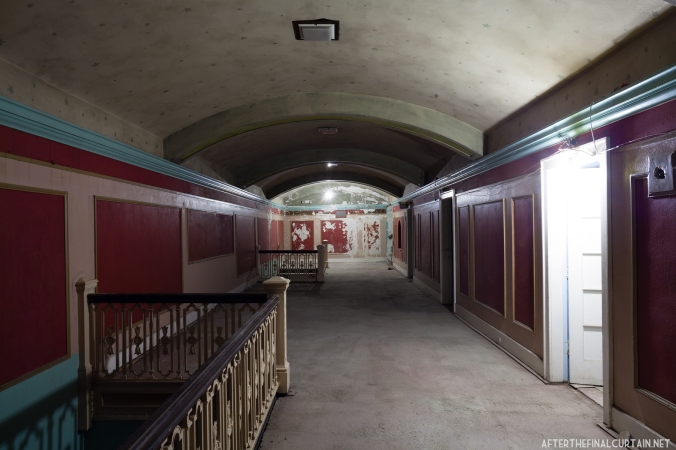 The ceiling of the foyer is painted with stars, perhaps to echo the semi atmospheric motif of the auditorium dome.

A close up of the theater organ.

The Historic Jayhawk Theatre, Inc. continues to raise money to restore the theater.

The snack bar was most likely added years after the theater opened.

The projection room was blocked off from the auditorium, and was converted into part of the office building.

View of the auditorium from the main level.

A close up of some of the plaster-work surrounding the dome in the auditorium.

The dimmerboard was one of the first ones in the state.

The mural on the proscenium arch was painted by William Peaco.

A close up of some plaster work on the side of the auditorium.

6 thoughts on “The Jayhawk State Theatre of Kansas”