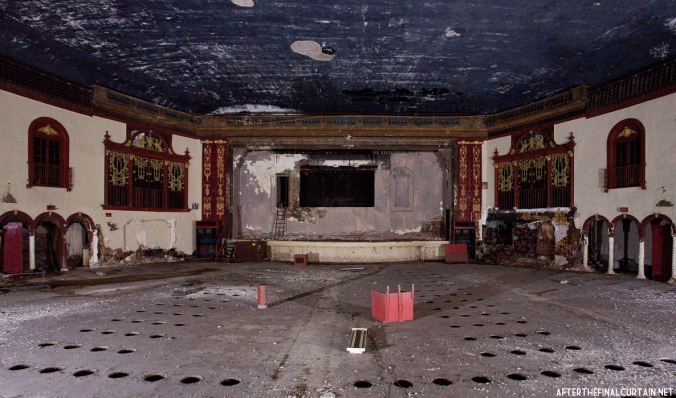 The Ramova Theatre opened on August 21, 1929 in the Bridgeport neighborhood of Chicago, Illinois. The 1,500 seat theater was designed by architect Meyer O. Nathan in the Spanish Revival style. An atmospheric theater, the ceiling was painted blue to resemble the night sky. A contest was held to name the theater while it was being built, and the winner named it after the Lithuanian word for “peaceful place.”

The theater’s atmospheric motif started in the lobby.

The theater opened with a showing of the movie “The Desert Song” starring John Boles, Louise Fazenda and Myrna Loy. The Ramova stopped showing first-run films in the 1950s. The theater closed in 1986 due to declining ticket sales. The city of Chicago took ownership of the building in 2001.

The back hallway of the theater has been badly damaged over the years.

Save the Ramova, an organization dedicated to raising public awareness of the theater, was founded by longtime Bridgeport resident Maureen Sullivan in 2005. Save the Ramova has teamed up with the Illinois Institute of Technology to develop a business plan to renovate the theater. In late 2012, the city of Chicago began work on stabilizing the facade of the Ramova. 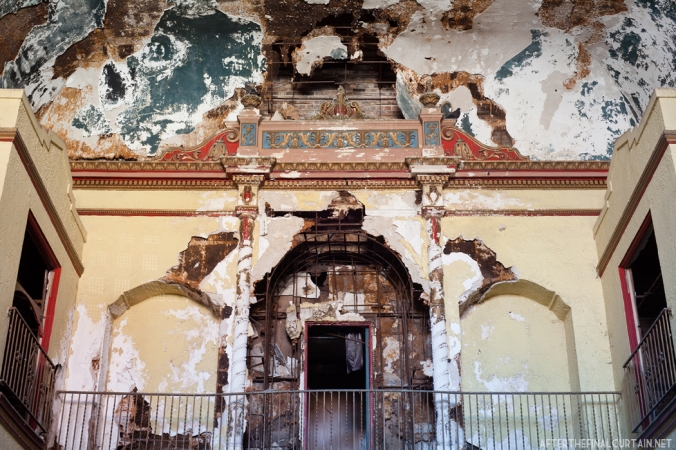 A closer look at the top of the lobby.

The right side wall of the auditorium.

A close-up of plaster work.

5 thoughts on “The Ramova Theatre”